Welcome to Minecraft World! Check out our advanced tutorials and come play with us on our free server.

Gathering resources can be an exhausting business. Hours can be spent collecting feathers for arrows or in search of enough Ender pearls to find a stronghold. Luckily with enough planning and effort, the hard work can be done for you with mob traps!

Mob traps are mechanisms that trap, kill and collect loot from monster or animals mobs. They are usually powered by either redstone, lava or water, and some use gravity alone. Mob traps range from extremely simple to very complex.

During last Saturdays Weekly Workshop, we built three of the most commonly used types of mob traps, each utilizing different game mechanics to their advantage. We will be going over each trap made and its unique advantages.

Animal traps are different than monster traps for several reasons. For instance, monsters appear in darkness or in bulk at monster spawners, so you need to either create darkness or wait for night in order to trap and kill them. Animals on the other hand spawn on undisturbed grass in daylight conditions.

Animals can be killed in several ways. For traps, the most common methods include making them fall to their death, drowning them, or burning them in lava.

In order to optimize the effectiveness of your animal traps, we'll need to know more about them.

With the exception of the chicken, animals will die from a fall of 23 blocks.

Another very important difference with animals is that you can breed them using wheat. This means that you have more control over the amount of animals you have in your traps.

Let's go into a little detail about each animal type.

With the exception of Nether Mobs, monsters appear only at night or in dark areas. They can also appear in dungeons which have a mob spawner block inside them. Monsters can be killed by the same means as animals.

Monsters will always spawn 24 blocks away from where you are during their spawn cycle, so some monster traps fail to work if you are within that amount.

While monster mobs die in the same way that animal mobs do, there are some exceptions. Most monsters will die when they fall 23 blocks, but this has changed for some mobs, so your best bet for killing them via falling damage is about 26 blocks.

By far the simplest method of killing mobs is gravity. Forcing mobs to fall to their death sometimes only requires digging, but more than likely will require more planning than that. Remember, this will not work for chickens (they can fly) and may only work sometimes for spiders (who can climb up walls).

Animal traps that use gravity can be fairly simple. After all, the trick is to get animals to fall into a hole. Remember though, animals will only spawn on grass and will avoid falling to their death if they can help it. When running into trouble getting gravity traps to work, the solution is water. Water is often used in mob traps to push animals or loot in any given direction. In this case, I simply placed a few long troughs of water running into a pit.

There are many variations of falling traps for animals, but they all rely on open grass, so the variety of traps possible are not as great as monster traps. And as of 1.9, one can simply breed animals, so animal traps are no longer completely necessary.

For my monster gravity trap, I used a zombie spawner as an example, only this time digging a pit wasn't enough. The zombies fell and were hurt, but were not dead.

You may often run into this problem when making traps with mob spawners underground, as one can come to hit bedrock fairly easily.

In this case, the solution is an elegant, simple design inspired by user mcKS. One can create an elevator of sorts with water and signs in order to increase the height mobs will fall from. Monster and animal mobs will jump when in water and it's this jumping motion which forces them up the elevator pictured below.

The gravity trap is a simple and effective, but not perfect for every situation. Water is one of the oldest Minecraft mechanics and it's effective for all types of applications. As we have seen, it can turn a failed trap into a functioning one. Let's look at another kind of trap that uses water, not to drop mobs to their death, but to drown them.

By far one of the oldest and most effective Monster traps relies on using water to drown mobs. This method sometimes requires less time than gravity traps and yields much more loot over time. There are several variations and ways in which to drown mobs, but let's look at an effective small scale trap.

The particular water trap we built for Saturday's Workshop was fairly easy to construct. It works by trapping prey who just happen to walk into any of its four sides at anytime. The unlucky mob is pulled underwater, drowned, and the dropped loot moves into the center of the trap ready for you to collect.

The size of the trap can be a box 10 by 5 squares or larger. 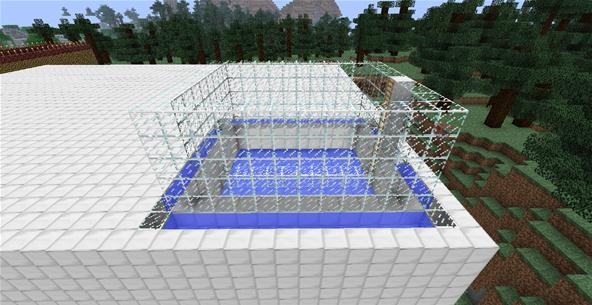 The trap is surrounded by trenches on each side that are 3 blocks deep. The far wall of each trench is filled with water so that 4 flows of water are constantly pushing towards the center of the trap. 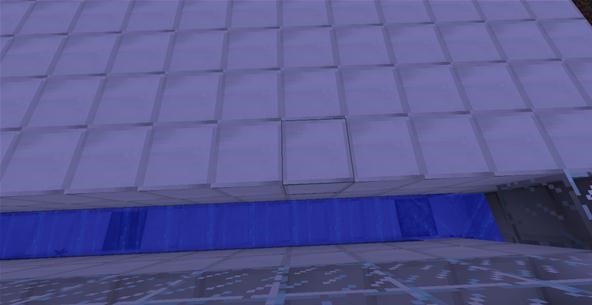 Each trench is then filled in with water from above. 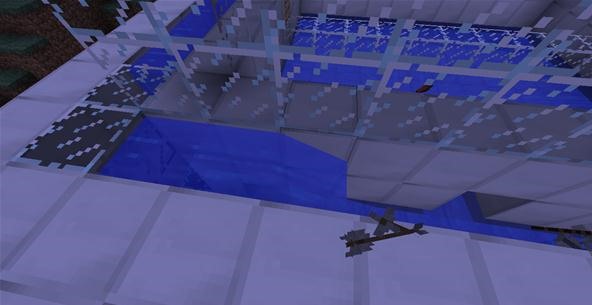 The resulting effect is water that pulls prey down and forces them against the walls of the trap, not letting them come up for air. When the trapped mob dies, the dropped loot moves into the center of the trap ready for you to collect. 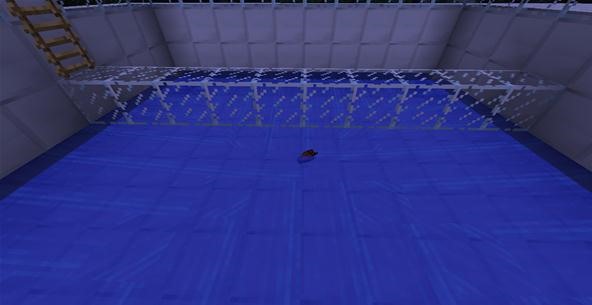 Here you can see a zombie getting sucked in. 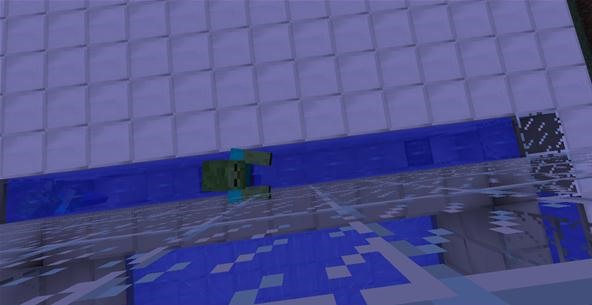 A redstone trap can range from simple to extremely complex. As one could imagine, there are various possibilities. For example, user ML32 created a redstone trap that yields about 60,000 items an hour. While obtaining tens of thousands of items an hour isn't necessary, it's certainly a testament to the power of redstone.

A redstone trap will typically make use of pistons, dispensers, pressure plates, and the like in order to either make the trap more efficient or to add a special feature like a warning system to alert the player that loot has been obtained.

For our purposes let's look at a trap that uses redstone as its mechanism for the mass harvesting of mobs.

Our redstone mob trap uses pistons to pummel mobs and collect their loot. It runs off a redstone clock that closes the pistons on our prey intermittently. Admittedly, this system isn't any faster or better than using water or gravity, but it is a fun use of redstone and it's sure faster than digging or calibrating a lava and water trap.

Here, we made sure to close off all possible escape routes. 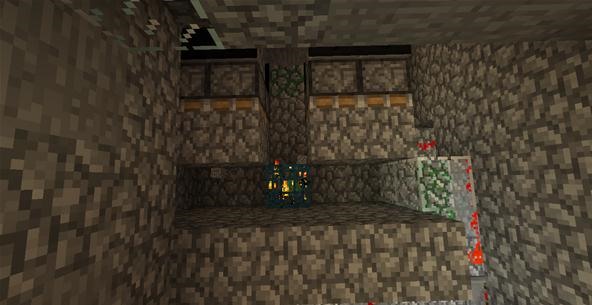 There is nowhere for the mobs that spawn to go, so they are crushed to death.

Tips for Optimizing Your Traps

Now that you've built a successful trap (or sets of traps), here are some ways you might increase your output:

The traps we went over are probably the most commonly used traps used in-game, but they certainly aren't the only ones. As with all things in Minecraft, there is a stunning variety of traps in differing forms, fashions, and functions.

If you are interested in seeing any of the traps mentioned here, simply log onto to the server and type "/warp traps" in game. If you are not yet a member, you can apply to be whitelisted here. If you have any questions about our Weekly Workshops or about this guide, feel free to ask it in the comments section below or start a thread in the forums.

Thanks for this, I'll be sure to use some of these soon :D

No problem, thanks for reading! Are you a member on our server?

Yeah, I haven't gone on it for a while though...

Thanks for the article, it really helped me understand traps. I do still have some questions though, as I am a returning player after a year of not playing:

how do I construct and keep animals in a farm?
What other effective traps are there?

Where would be an ideal place to set a trap in regards to landscape (not in relation to the distance between house and trap)?

What do the different parts of a redstone trap do?

How do I attract animals to trap using grass, do I build a trap that surrounds a lot of grass for the animals to spawn on or what?

would lining the walls of a gravity trap with water make it so that spiders can escape it?
How do you cure food poisoning from eating the rotten meat?
How would I make a lava trap?

That's all. Again, thank you very much for the article. I really appreciate how many pictures you have implemented into your article.

this isn't that exhaustive of a guide... ... jus' sayin' you could've added A LOT more to the article.

Just to put it out there, 23 is actually the amount of blocks a mob needs to fall to be JUST ALIVE so that you can one-hit it, and is actually used for XP grinders.

Not only that, but chickens, cows, sheep and pigs now only spawn upon generation of new chunks (going to new lands) so they won't continue to spawn on grassy area. Breeding is now the best way to make a sustainable mob farm.

So what is the number of blocks all MOBs/ animals need to fall (except for chickens) to die?