There are a few ways to make trapdoors, but out of all of them, this one is my favorite. It's fast, completely hidden, and both opens and closes. This particular trapdoor can be used for a variety of purposes, such as hiding your valuable possessions, having a secret entrance to an underground lair, or maybe even taking care of obnoxious cows. What you'll need to make it are 12 sticky pistons, 8 redstone repeaters, 32 redstone, the switch of your choice, and whatever blocks you want to use to hide it. This is what it looks like when finished:

The hole needs to be a minimum of 8 blocks wide, 10 blocks long, and 3 blocks deep, as such: 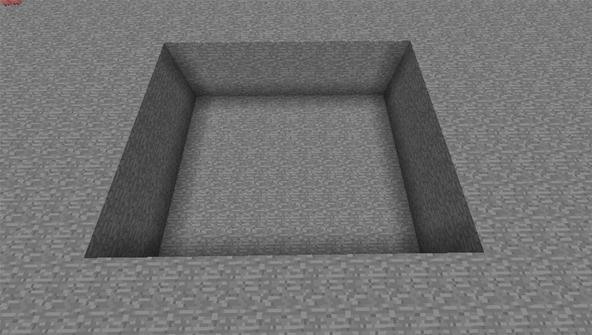 It can be much, much bigger, or part of an existing structure if you want, but this is the minimum size.

Step 2 Make a Tiny Hole in the Middle

In the very middle, make a hole 2 blocks wide and 2 blocks long. It can be any depth you so desire, including all the way down to the bedrock! 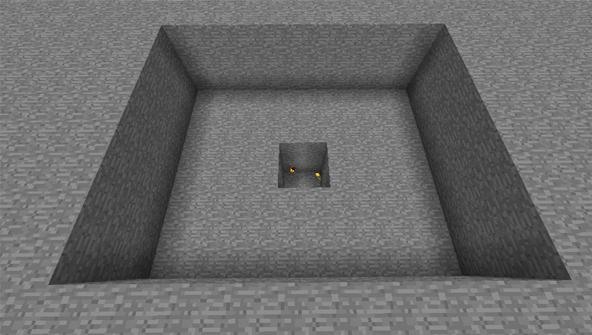 Add four sticky pistons, facing inward, one block away from the hole. Do this on the sides where there are four blocks to the wall, not three. 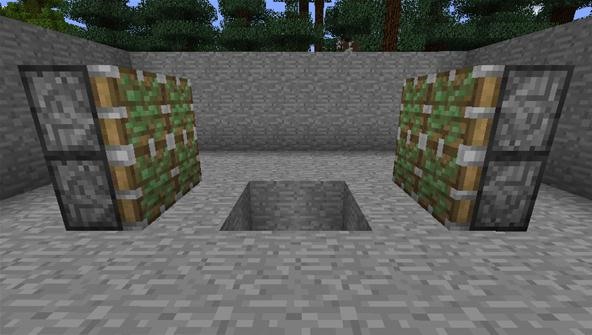 If done correctly, there should be two empty spaces between your pistons and the wall. Also, note the cow in the background photobombing me. This cow is optional in your own designs.

Step 4 Fill in Blocks Behind Your Pistons

Fill blocks between your pistons and the wall to only one-block in height. That should be four blocks per side. 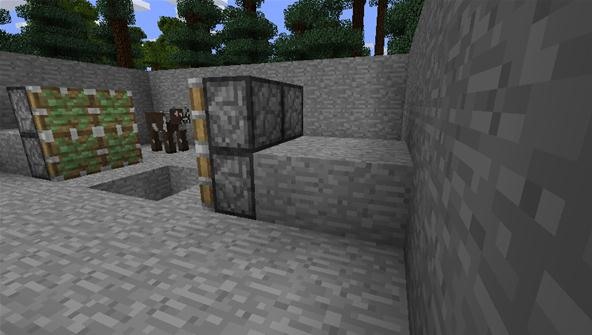 Step 5 Place Blocks Directly Next to the Hole

Now you'll be adding two blocks on each un-pistoned side directly next to the hole, as such: 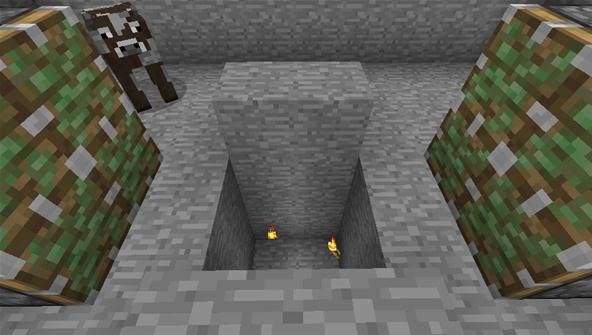 This cow was seriously freaking out about how cool this is. I don't blame him.

Now add two pistons (on each side, four total), facing up, between your already-placed pistons and the hole, as such: 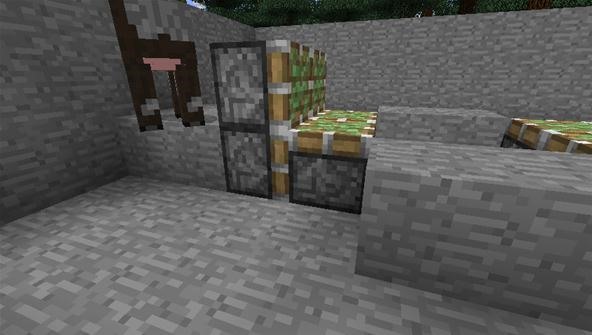 And the cow decided to moon me. What a jerk!

Step 7 Place Your Repeaters and Fill In the Pistons 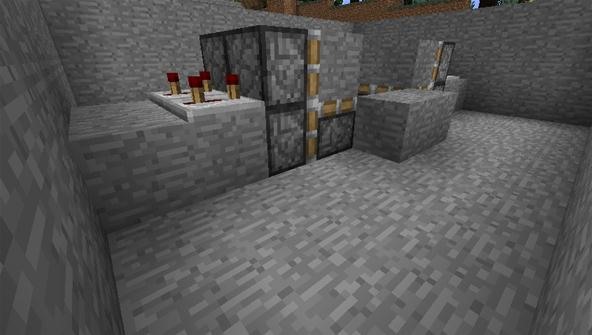 Hmmm, where did that cow get off to?

Now you'll add two more repeaters to each non-pistoned side, with no delay at all. 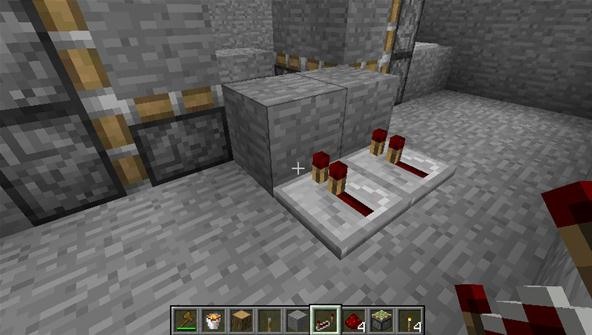 Now all that's left to make this rig functional is to wire redstone around the bottom edge of your workspace, connecting all of the repeaters, as such: 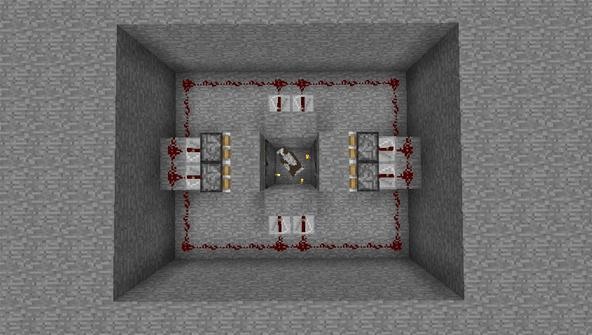 Oh, that dumb cow got right into my trap! He deserves it for shaking his butt in my face earlier.

At this point in a build, I like to just test the redstone to make sure it's working properly. Since the circuit is looped, you can add your power source anywhere you'd like and it will still work properly.

Now that you have a functioning mechanism, all that's left is putting the switch where you want it. If you want the mechanism to be ENTIRELY invisible with no redstone showing whatsoever, put a block at your place of choice in the redstone circuit, and raise the connection one block, as such: 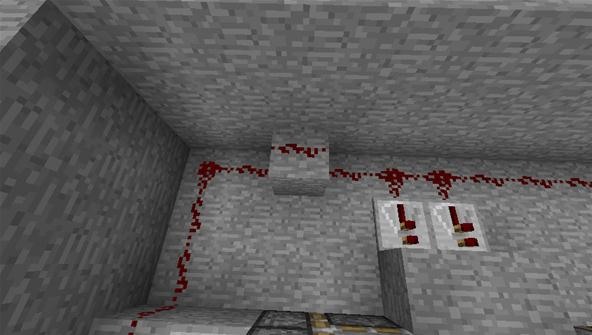 Then just add another block above that, and put a switch on it. Voilà! No other redstone necessary, and if you fill the area in with a surface layer, it will be totally invisible. 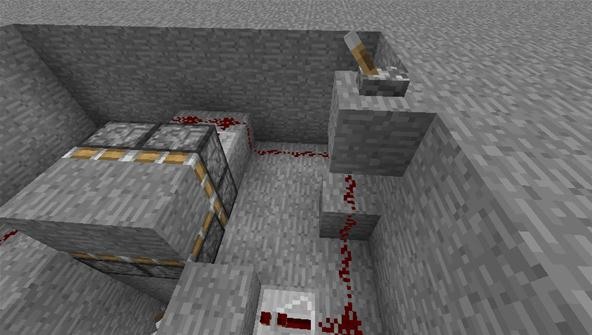 Step 12 Filling It In

Activate the mechanism, which should raise the blocks to ground level, and then just fill in around them:

You now have a fully-functioning, hidden trap door! Once you've done this, don't forget to pop inside really quick and fill in these empty areas. They won't affect functionality in any way, but it's not very stylish to have your redstone showing. 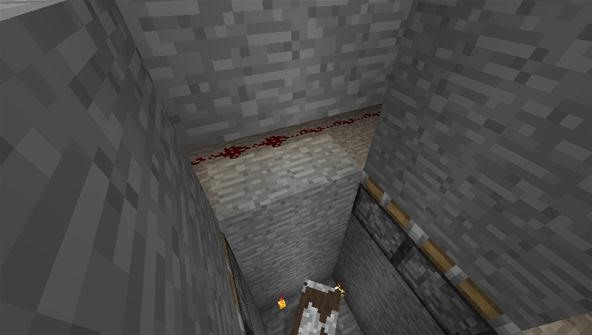 Also, the cow was still stuck in that hole. What in the world am I going to do about this guy?

Say that you don't want your lever that controls the trapdoor to be on the floor. Maybe you want it on the wall instead. Well, all that you have to do is add some torches as I've done in the pictures, some more redstone, and then you're all set!

You want a redstone torch attached to the side of your block at the bottom that your redstone goes over, and then add another block directly above that torch, but with an empty space between them. Then put a torch on that block, and run the wiring from it.

The only downfall of this is that the top torch needs to be visible, as well as the redstone on the surface. However, those are easy to hide in a wall or to put out of sight in some other fashion.

Step 14 Deal with the Cow

Like I said in the beginning, the inclusion of a cow is totally optional. However, if you've chosen to take the cow route, you may find that you have a situation like this: 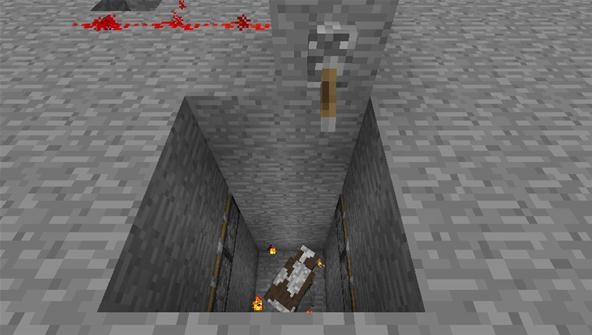 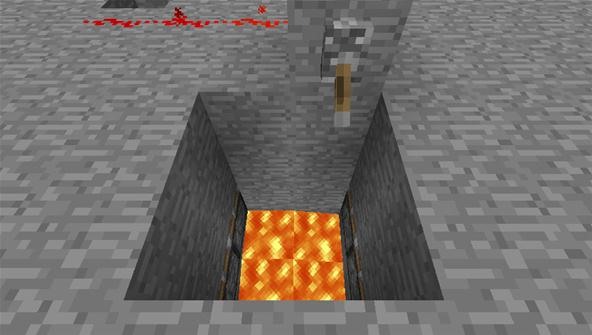 Now tell your friends, "Okay, stand riiiiiiight there for a second, while I flip this switch...".

Is there a longstanding feud between anteaters and cows of which I was heretofore unaware?

heretofore is a great word...

Sure! It's more or less the same setup, you just have to wire it differently. Redstone can be really finicky sometimes, so I totally sympathize. =)

I agree with him! I really want to know how to make a door like this!

Sure, Pat. I went ahead and made it, and did a tutorial for it. Due to the interest, I'll fast-track it and put it up either next, or the one after next. =)

You guys, the problem with creating a horizontal version is that you can not feed the redstone directly into the pistons from all sides at once due to the fact that redstone may only be placed on top of blocks. To avoid this, you power the main eight pistons the same way (from the sides), but power the other four (ones that come towards you to make the wall flat) from the top and bottom. You may find this hard to accomplish without redstone showing, but if you place a block over a torch on the side of another block, it will power the first block allowing a piston above/below it to be powered.

I will attempt to illustrate this through my iPod, but it may be hard to understand. The "D" represents redstone Dust. The "R" stands for Repeater. "S" means Stone, "P" means sticky Piston, and "T" means redstone Torch. The "->" represents the direction the piston faces. This is a side view of what it would look like to power the piston comming out of the wall.

I appologize if this ends up not aligning correctly due to me being on an iPod or if it's too hard to understand. If requested, I can post it in pictures to more clearly show how it works. The pathetic illustration above is only showing how to power one set of pistons, so for non-redstoners, I can foresee this being difficult to copy.

Thanks for contributing, Noah! As I'll show in my next tutorial, it's possible to run the redstone over the top only, without running any redstone underneath. Additionally, the horizontal version is actually even more compact than the vertical.

The layout of the pistons is the same, it's just tricky to figure out where to put the redstone. =)

Meanwhile, we encourage people to make their own tutorials and post them on the corkboard. If you make a good one, we'll feature it on the main page!

Ok, thanks for responding. I haven't spent much time with basic hidden doors, so I'm no expert on super compact designs such as this. I mostly try to create more creatively hidden doors or redstone features to inspire other people to build with creativity. I am one of those people who dislikes uniform colored builds and encourages people to incorporate originality into their builds. I love the feeling if knowing that I helped someone. Also, no problem replying. I try to help in any way I can :) .

Hey, knowing how to effectively incorporate those redstone machines into your builds is just as important, if not more so, than being able to innovate them yourself. After all, why bother making these if not so that you can use them?

I encourage you to make tutorials showing how best to do that! =)

Ok, thanks! Speaking of sneakily incorporating redstone into builds, I made a pretty cool door for my friend. On his server, he made a small town with a fountain in the center and wanted a secret room for the server staff. I made the bottom if the fountain slope inwards (with stone and stone slabs) and the bottom four stone would actually move aside revealing a hidden door. I also made a very secretive way if opening it. In one of the nearby houses, I made one of those old button-activated refrigerators where a door opens and a dispenser shoots out some food. The button activated the fridge, but also connected to a T-flipflop feeding into the piston door under the water. When someone used the fridge, the piston door would open and stay open for them. Then they can descend into the passageway and press another button at the bottom, also feeding into the T-flipflop, in turn closing the door. Now people in trusted with the secret are able to enter the hidden door and close it behind them, leaving how to enter it a mystery to everyone else. =D

That great, Noah! Just the sort of sneaky stuff I love. =)

You should post pictures and tutorials to the corkboard! I'm sure it must be of interest to more people than just me!

This is the same design I used in one of the traps during the trap challenge. It's modified for space and is activated by a BUD switch connected to a furnace. And yes this is way easier to do than a door. I'll set up the two someplace in the next couple days as a guide.

are they ways to make this larger than 2x2?

I think that there are ways to do it using double piston extenders, but don't take my word for it XD I haven't seen one but they are probably out there

how do i get back up, im using for secret base