Sometimes mining and crafting gets boring. The thrill of hunting mobs, exploring strongholds, or the Nether is often much more satisfying and appeals to the RPG nerd in all of us. Well, Mojang took the hint and as part of the 1.9 release, there will be potions, more mobs, other worlds, and enchantments added to the game. To preview this release, read my tutorial on how to download and install 1.9.3.

Pre-release 1.9 part 3 contains a potions system, a preview of skylands, enchanting tables, and additions to strongholds; some new mobs were also added. Most of this content is half complete, but nonetheless interesting.

Potions are, so far, the most complete update and as such the most game-changing as of yet. So without further adieu, let's take a look at "brewing".

So what are potions anyway? Potions in Minecraft are pretty much what they are in any fantasy lore. They are bottles of magical stuff that have an effect on your player character such as speed, health, or power for a given time of effect.

Before you begin brewing you will need water bottles, a brewing stand, and a cauldron or two (optional).

For water bottles, take three glass blocks and place them in crafting table like so. Each batch will yield three bottles.

For a brewing stand, you will need three cobblestone blocks and one blaze rod.

Cauldrons only hold water and potions at the moment, so you may find them useless. Rumor has it cauldrons may have a different use in the future. To build a cauldron, you will need seven iron ingots.

For added color or storage purposes, you can dump your potions into cauldrons! 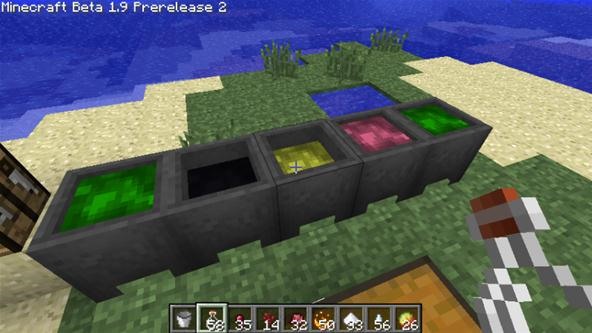 With the exception of water, which I trust you can find on your own, you may wonder where these new ingredients come from.

You will first need water bottles, which in turn become your potion bottles or vials (which sounds cooler).

To make water bottles place three glass blocks into a crafting table like so.

Three water bottles removes one buckets worth of water. To collect water in your bottles, simply left click a water source with a water bottle in hand. If you like, you can keep your water stored in cauldrons, but any container will suffice.

If you happen to not be interested in specifics and just want to get your mad scientist hands on some concoctions, then simply open your brew stand, fill it with bottles and start trying out combinations of the ingredients above. 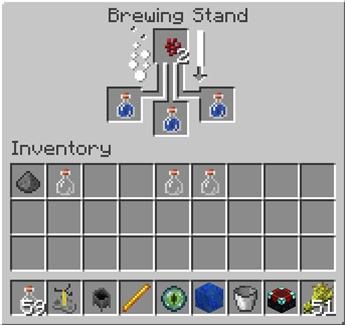 Keep in mind, however, this was just a quick list of overall potion ingredients. To get desired results, you'll need to know a bit more about the process and each ingredient.

Potion ingredients can be further broken down into the following groups: Base Potion Ingredients, Special Effects Ingredients, and Modifying Ingredients.

Base potions are what you will always start with in brewing. They are potions that set the foundation for effects that ingredients you add later will have.

Keep in mind that all potions require water bottles, as water is the fundamental ingredient common to all potions.

The first three bases of Awkward, Thick, and Mundane have no effect in themselves until you add further Modifying Ingredients to them, whereas the Weakness base has the effect of weakening the damage the player can do to animal and monster mobs for exactly one minute and thirty seconds (1:30). This contradiction strongly suggests to me that Weakness Potion will not make the final cut as a base in the official 1.9 release.

To make any of these bases, simply add the corresponding ingredient to your potions in the potion stand, like so.

Once you have your base potion, you will need to add a further ingredient to get an effect (with the exception of the Weakness Base).

Special Effect Ingredients are ingredients that when added to potions give them an effect on the player who drinks them. They include:

Now this is where it gets weird. At the moment, for a reason that probably has to do with the systems current incompleteness, the awkward base potion does most of the potion making. The Mundane and Thick base can only have one modifying ingredient added to them (fermented spider eye) which creates the same potion in either: the weakness potion. The only difference is time of effect in which the weakness potion with the mundane base is 4 minutes whereas the weakness potion with the thick base is 1 minute 30 seconds. Strange as all that sounds I'm sure it will be straightened out by release day.

Now that you understand potions and how their ingredient combos work let's get to making them!

As stated earlier, most of the potions are made from the Awkward Base and some have contradictory effects, but if you read through the recipes you'll find what suits you I'm sure. The numbers in the titles are the minutes and seconds that the potion is effective on the player. The II's indicate that a potion is a tier two potion, meaning that its effects are more potent—albeit for a shorter span of time.

Potion of swiftness (3:00) = Awkward Potion + Sugar. Increases speed of sprint and distance of jump for 3 minutes.

Potion of strength (3:00) = Awkward Potion + Blaze Powder. This adds plus 1.5 damage to all attacks.

I will be adding updates as they come along. Please remember this is a pre-release and if some of the potions or recipes don't seem to make sense this is due to the nature of unofficial updates.

Potions add a fun and mystical side to Minecraft and I hope you have fun playing with them. Have fun mixing and matching them and remember you can take multiple potions at once! Never has Minecraft seen such reckless abandon!

If you still do not have the Minecraft 1.9.3 pre-release, learn how to download and install it here.

If you haven't joined our server you can apply to do so here.

I'm starting to really like Minecraft-Tower - It's hard to find but it's there: http://www.gameimob.com

Potion of instant health is actually made with a glistening melon. Making it with a gast tear make a potion of regeneration.

Thx that was supper helpful!

Potions are brewed by adding flasks of water to the cooking rack and then adding the ingredients. First, you need to boil one of the four main potions, then add the main ingredients to them. Also, potions can be knocked out of a drop after killing a witch with a fairly small chance.