Hello, everyone. My friend and I recently released a Defense of the Ancients (DotA) map that went viral and thought I should share it with Minecraft World on WonderHowTo since you guys helped me out when I first started making videos!

We were featured on Kotaku, RockPaperShotgun, Gamespy, The Verge, Joystiq and many more websites!Exciting!You can see the full details below are head straight here for the downloads.

Every X seconds, a redstone system will allow creep spawn if there are players nearby.

To break down a tower, you need 2 players. When a tower is destroyed, the creep spawner and the defenses deactivates.

When activated, the tower releases several Poison II around the tower. The poison is deadly, it can hit up to 9.5 hearts!

In Minecraft: DotA, you will need to work as a team to unlock special shops.

Minecraft: DotA has many sweet features! 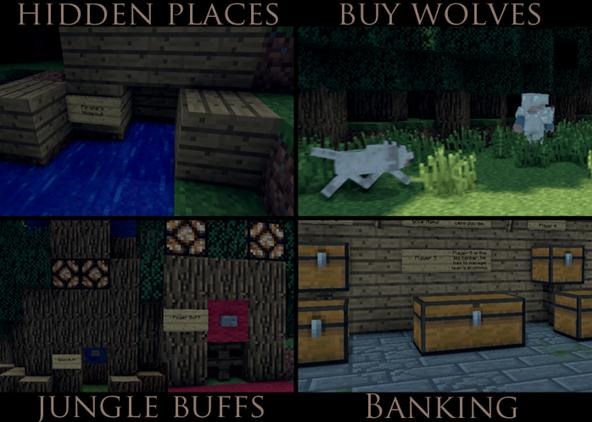 This map requires NO client mods at all. However, we suggest basic server mods for team chatting and no block destroying to prevent exploiting.

What is the main objective?
Kill all towers then proceed to destroy the nexus. Just like DotA/League of Legends, but you have to destroy all towers before nexus is vulnerable. Gather items from dead NPCs and players to buy upgrades to ease your way in. 6 to 10 players PvP map.

Is there any important rules?
1- Make sure no one enters the opposite team's base before all towers are down (to prevents players from stealing or spawn camping).
2- Do not break any blocks, not even flowers, grass or torches (server mod strongly suggested).

How do I start the game?
First of all, install a fresh download of the map and make sure it's the latest version. Once in game, you will spawn in the team arrangement room. Wait for everyone to connect and discuss what should the team be; when it's all setup, just grab ONE cart and head to your chosen base.

IMPORTANT: When everyone is at their respective base, the most important thing is to setup your spawns. Everyone needs to sleep in a bed, in order to do that the host of the game may have to change the time to night /time set 999999. When it's done, both teams need to lift the levers and a 30s countdown will start (see lanterns), giving you time to get stuff from the bank and maybe buy a stone sword with your, now useless, minecart.

How do I destroy a tower?
To destroy a tower, you need 2 players. First, one of you must stand on one of the pressure plate beside the tower, doing so will release pistons from the windows, making the tower vulnerable to attacks. Watch out! The towers poisons the player near the tower with elemental damage; I suggest buying Protection enchanted armors and health potions. Without any armor it can hit up to 9.5 hearts.

How to kill a nexus?
For of all, you need to disable all towers. When it's done you need 2 players to press both pressure plates and a 3rd one to shot it down.

How do I buy items from the shops?
The currency system is based on items; you get random stuff from dead zombies, skeletons, players and trade them for weapons, armors, food. Simply throw the required amount of items down in the hole. For prices over 4 items I suggest throwing them down slowly to prevent redstone bugs, 2 secs delay between throws is safe (the buying system will be made fully automatic if needed in future versions).

Never played DOTA, what are lanes for?
Has shown below, there are 3 lanes; top, mid, bottom. Each lanes has 2 towers, except the middle lane (unlike original DotA games). They must be defended with at least 1 player each, otherwise that lane could be zerged down and could create a potential vulnerability to your team because the less towers/lanes you control = the less items you make and the less efficient your team becomes over time.

The basic plan is to send 2 players top, 2 players bot and 1 middle. For advanced players, I suggest sending one player in the Jungle to farm skeletons, get buffs and be more aggressive.
When you are at your furthest (not destroyed) tower , simply farm some creeps by moving in front of your tower. If you get in trouble, remember to call out for help or use the tower defenses. Most importantly, call for MIA (Missing in action) enemies, to prevent other lanes from being ambushed. 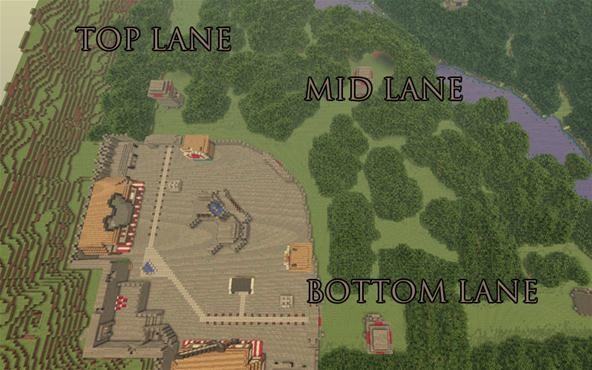 How do I unlock special shops?
Special shops are unlocked your nexus. At around 40 items each unlocks, they can be a tedious task if your team doesn't work as a team. Make sure to have a player assigned to deal with the team's economy.

Economy & Banking
You will die, a lot. What does it have to do with economy? Well, it means items are precious and should be banked! Always bank your stuff, that way you keep your enemies from getting load of items if they manage to kill you AND you can come back faster in the game. Every single items, from rotten flesh to gold, has the same value. They are units that can be traded for weapons, potions, armors and more. Remember that you can always throw your old stuff to pay your new stuff!

Jungle
The jungle is a dangerous place, leaving you vulnerable to ambushes without any towers protecting you from players. On the other side, you get your own creep, which means more items! Also, you will encounter skeletons, the most wanted creep in Minecraft: DotA. Skeletons drop arrows, allowing bows with infinity enchant to work (requires 1 arrow) AND skeletons drop bones, which can be used to tames wolves (that can be bought in the armor special shop). Also, you could farm buffs, RED(strength) and BLUE(speed) to help you farm creep faster or simply ambush an enemy. Having a player in the jungle can be very useful for the team to prepare surprise attacks.

To spawn a jungle creep, find buttons - if lanterns are on, it means the spawn is ready.

idwarf the great 10 years ago

I was the second person to diamond this on planet minecraft XD amazing map. I've really enjoyed playing this.

Either way it reminds me of league of legends.

It has a lot of features form all Moba games indeed, I used the DOTA term to be familiar with gamers

idwarf the great 10 years ago

i really like the tower defense. that's probably one of my favorite things