You may know that Minecraft is an excellent creative tool, but perhaps less well known are the fascinating array of redstone powered games that have been made by players like you.

Multiplayer games like Spleef are fun, but even more impressive are automated redstone games. These are games of any type that are playable with one or more players that run on redstone. They often feature many moving parts, displays, and complex gameplay elements. I mentioned Youtube User FVDisco's Cake Defense game in this week's Weekly Workshop article, but other striking examples include Disco's Slot Machine, Connect 4, or Minecraft DDR.

How an Automated Redstone Game Works

What happens: When you enter Cake Defense, you begin by pressing a stone button that releases monsters mobs. The game gives you sixty seconds to defeat each wave and as you do, each round of fighting is marked on a display in front of you. When each round is completed, special loot drops from the center of the platform.

How it works: When you press the stone button to activate the game, the memory array is activated. A memory array works on the same principle as the sheet music in the programmable piano, only in this case, the memory being stored in the rotating glass and wool does not correspond to musical notes, but to conditions in the game.

For instance, above on the right is an example of sheet music for a programmable piano. Each wool block corresponds to a note that plays on a music box using the transistor principle in redstone. On the left, you can see three memory arrays where instead of activating a music box and playing a musical note, each wool block activates a set of different redstone wires, timers, or pistons at the same time. So each time the memory arrays turn, they activate a different set of conditions which corresponds to what is happening to you while you play the game.

When you press the stone button at the beginning, a sixty second redstone timer is activated, which releases special loot in sixty second intervals.

This is an example of an extremely complicated build that likely took FVDisco a few weeks or more to finish, but this should not discourage you from creating something equally ambitious. Anything can be accomplished with enough planning and effort. If you would like to see some of the mechanisms responsible for his machine, log onto our server and type "/warp cake" in chat.

Creating Your Own Automated Redstone Game

Obviously, the more complicated your game is the more difficult it will be to make. I suggest for your first attempt that you try to keep things simple. For the purposes of this tutorial, I will use the redstone obstacle course I created Saturday. If you would like to see the game yourself, log onto our server and type "/warp obstacle" in chat. I kept the mechanisms of my game uncovered so you can see how it works.

Step 1 What Is Your Game and How Will it Work?

Probably one of the hardest things to do will be to decide how your game will function.

Some things to consider:

As stated above, it is best to keep things as simple as possible for your first try.

I kept my obstacle course simple, but interesting. My obstacle course works using piston lava pits, arrow dispensers, and a simple memory array. The objective is for the player to get to the finish without being dropped in lava or hit with an arrow. I kept it to three elements for the sake of simplicity and explanation, but feel free to use your imagination.

This is probably the hardest and most complex step. This may require many hours of fine tuning if you let things get out of hand.

The first obstacle you encounter in my redstone game is a lava pit that appears and disappears. I made this using sticky pistons that run off of a redstone clock as seen below. The player has to time their running carefully or risk falling into the lava pit. I've lined the obstacle course with walls of wool to keep players locked in death run.

My first obstacle is powered by redstone clocks. We went over redstone clocks and delay pulsers in a previous article, but I'll go over the ones I made here as well.

Redstone clocks are fairly simple. They are made from four redstone repeaters in a circuit. Each repeater can be set to a different timing by right clicking them. As the current goes around the clock, it moves from repeater to repeater based on the timing each is set to. The redstone pulse that results from these clocks powers my piston obstacle at different timings. You can view the redstone clock arrangement below. 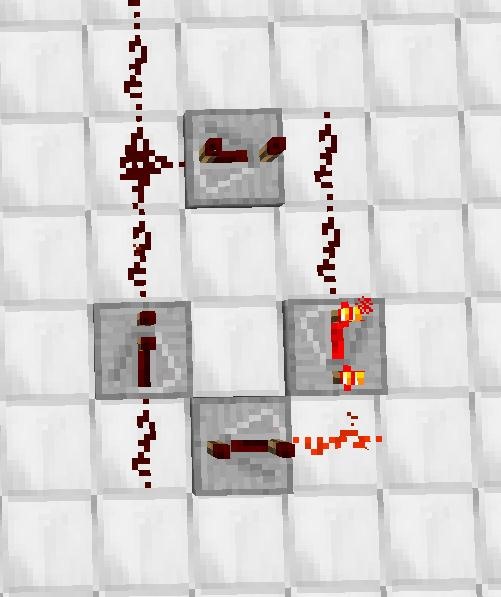 Pressure plates and pistons can get boring. Having them alone would make my course too easy and so in order to add some variety to the experience, I added a second arrow-filled dispenser and piston obstacle that are powered by a memory array. As stated earlier, the memory array works on the same principles as the sheet music used in the programmable piano. Implementing a memory array gives some of my obstacles a less predictable path.

The memory array is basically the same as the sheet music used in the programmable piano, except that each "note" on the rotating player corresponds to an arrow dispenser and some pistons in this case, instead of note blocks. For a full tutorial on how to build the memory array/ sheet music click here.

We'll go over how the memory array works for our obstacle course here:

The result of the memory array obstacles is that some of the obstacles go off at seemingly random, but predetermined times. FVDisco used several much more complicated memory arrays to set circumstances, also known as algorithms, that cause different redstone circuits to activate at differing times. The majority of the complex actions that occur in his Cake Defense machine occur thanks to the memory array.

Step 3 Test and Perfect Your Game

The only way to know that your game is fun and functioning is to test it. Be sure that the timing, implementation, and function of each and every element in the game are calibrated correctly.

This is just one example of an extremely simple redstone powered game. I have featured a few other games on the server that include a version of Snake. This automated redstone version of the classic arcade game uses a redstone torch display, making it much more complicated than my obstacle course.

If you feel inspired, but overwhelmed with your game idea don't give up! Even these seemingly professional redstone games were created by players just like you using redstone mechanics. Every complex redstone game or epic build in Minecraft is manageable if you break it down, simplify it, and plan accordingly.

If you would like to see any of the games mentioned up close, log onto the server by applying here. To get to my obstacle course type "/warp obstacle" in game, to get to the Snake game type, "/warp snake" in game, and to get to some of the mechanics behind the Cake Defense game type "/warp cake" in game.

Join us Wednesday the 26th at 4pm CST this week on the server, as we will be creating some more interesting redstone games in group builds.