Hey everybody, here is my entry for the medieval building contest. I don't actually care if I win, it was just fun to think about.

I have this great book series called The History of Private Life which goes into wonderful detail about how people did everyday things throughout history. I haven't read all of the medieval volume yet (Volume II: Revelations of the Medieval World), so I got it out and started looking through it for pictures of houses to build. Since the instruction said "no castles" I started looking for the homes of the less fortunate. City houses at that time were tall and thin, but they were also piled on top of each other, so making just one of them would look strange. So I thought, why not make a peasant country hut?

So here is a little virtual tour of the house and homestead I made, with some interesting facts thrown in for fun.

Here is the house from the front. It has a thatched roof with a little hole in the middle for the smoke from the hearth to come out. No chimney, that was for people with means. The house is timber framed with cobblestone between the framing to make the walls. It was supposed to be on a stone foundation but that kind of got forgotten until it was too late. The gravel is meant to represent packed-down earth, which would go all around the house and make up its floor as well.

Here is the front door. 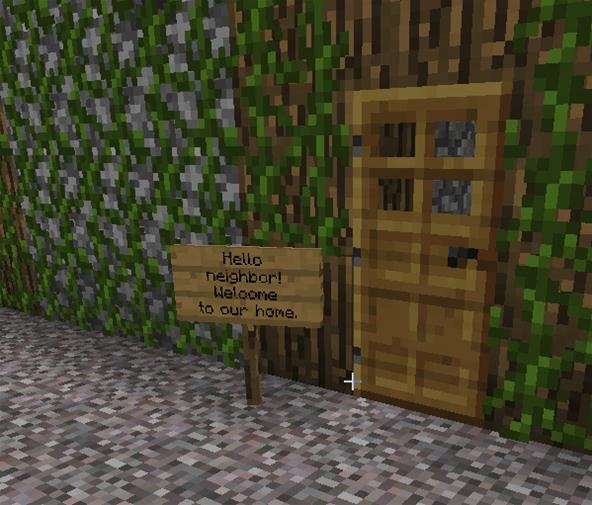 I made the signs like a conversation, but actually only a small percentage of people could read and write, at least of those who lived in houses like this one!

First we should walk around the outside of the house. Back then people spent most of their time out of doors. Walking to the left, we come first to the washing machine.

People washed their clothes in streams, using rocks as abrasion devices. Walking around the tiny pond, we get to the natural (ahem) clay deposit. Note that I used bone meal to encourage lots of wild plants to grow around the house. People didn't mow their lawns back then; they ate them. Most people knew the uses of many wild plants and relied on them often. 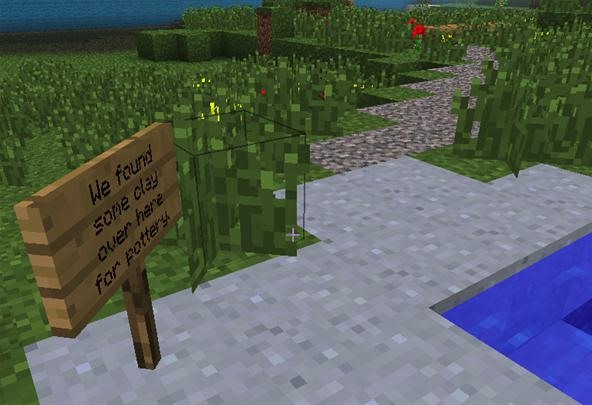 People back then made their own pottery, or there might have been a nearby potter, but they got their clay from the ground, usually right near where they lived. They got their wood and building stones nearby too.

Walking over the little bridge from the clay deposit we get to the amazing techological wonder of the day: the windlass, which is used in this case to irrigate the family's main subsistence field. A windlass was a wheel you cranked by hand (more like arm, because it was hard). Actually the windlass was invented hundreds of years earlier, but in the Middle Ages things moved very slowly.

Next we see the tool shed. Most houses had one out back where they made their own tools from leather, rope, metal and wood. 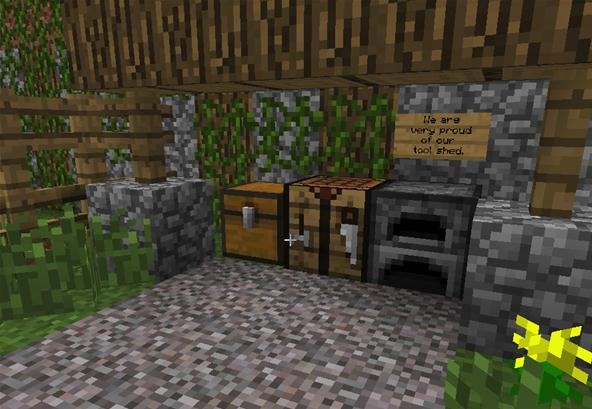 Coming around from the tool shed we get to the garbage bin. 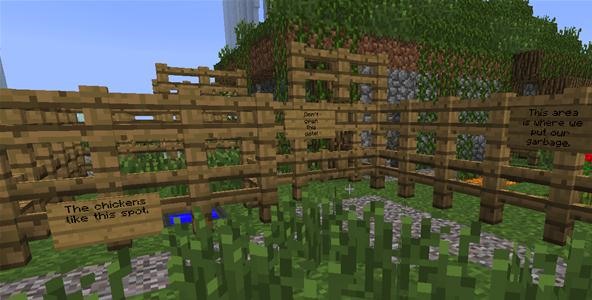 There was no packaging at that time, so most garbage was compostable. People had a heap out back on which they let the animals forage. That was all they needed.

Here is the whole scope of the back area. You can see SpudMunkey's giant church in front of the house. Actually that is perfectly medieval; cathedrals often took several dozen years to build, so looking out your windows and seeing a half-built church (for decades) was probably something a lot of people did back then.

Moving back around past the animal pens to the front of the house, we now go in the front door and find ourselves in the central chamber, where the hearth is. 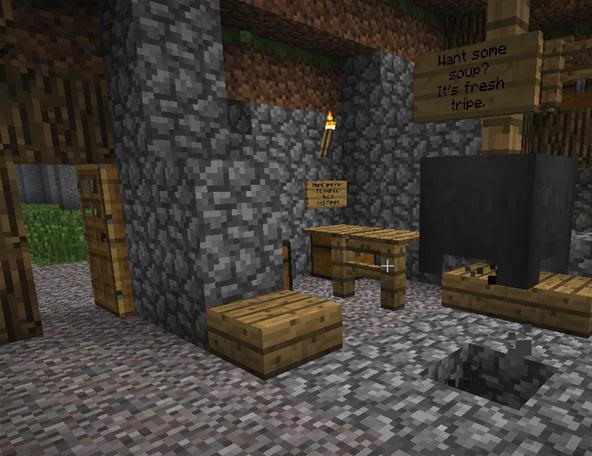 The hearth was a stone-lined hole in the floor kept burning, as the sole means of heat, cooking, and hot water for cleaning. Usually a cooking pot was suspended over the hearth permanently. It's a bit hard to see it in this picture, but the windows are tiny holes. The poorer people had no glass, so they kept their windows small to keep the heat in. There should be shutters on the windows (maybe trap doors would have worked) but I didn't think of that in time.

Turning to the right we can see the refrigerator. It has two parts. 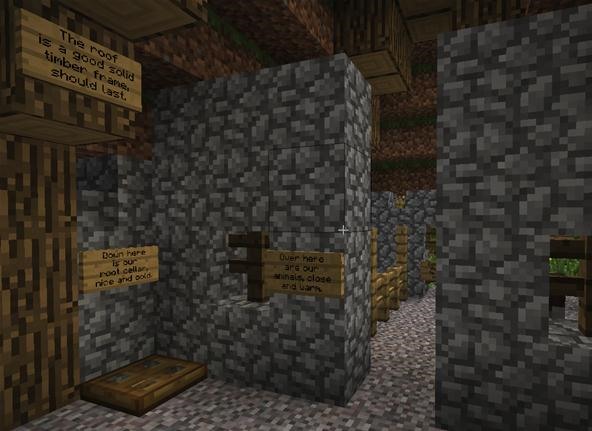 The first part is the root cellar there on the left. A small room set down into the earth was one way to keep foods as cold as possible. Also notice that the animal stalls are right in the house. Here we have two cows, one sheep, one pig and two chickens. That's probably one cow too many and several chickens too few, but you get the point. Most poor people lived in the same building as their animals. It was warmer, and it kept the animals safe from wild animals and thieves. It also served as the second part of the refrigerator: the milk and eggs were right there, always fresh!

Here is a cow in its stall. From this angle you can also see the timber framing of the roof, with the thatch over it. (Actually the walls separating the animals from the people would probably not be that high; Minecraft animals can jump ridiculously high.) 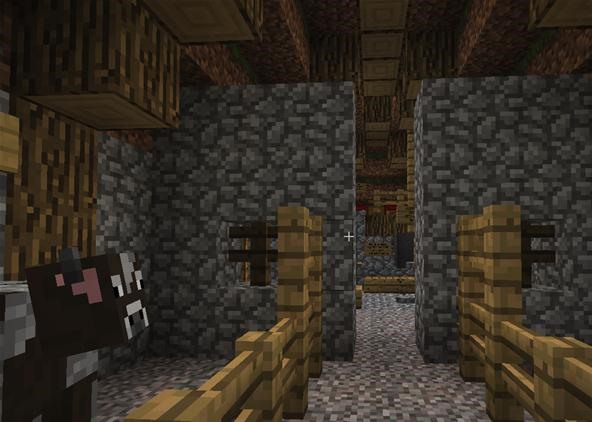 Turning to the left again we can see the family loom. 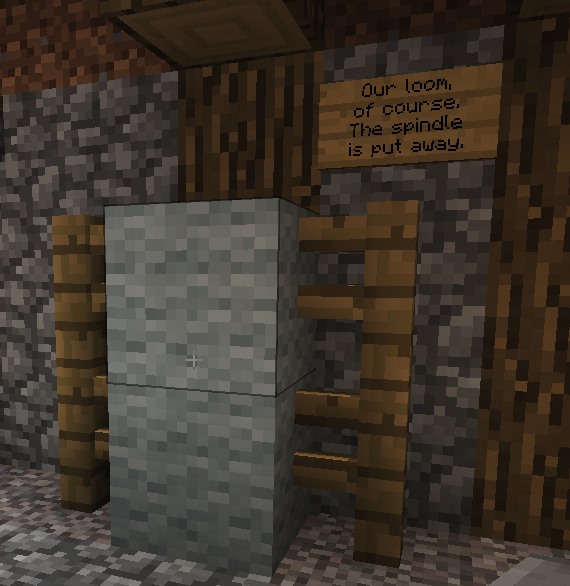 I would have liked to have had a spinning wheel too, but couldn't see a way to make one that looked anything like real. Back then every family spun and wove their own cloth and made their own clothes, whether they raised their own sheep or bought the wool from neighbors.

Walking past the loom we get to the main bedroom. In medieval times it was common for an entire family to share one large bed. Not only that, but overnight guests just jumped into the bed too! Anyway, you can barely see the bed in this picture. It is behind the large chest that holds all the of the family's clothes. In the center of the picture is the bathroom.

It's inside the smaller chest. It's a bucket. I originally had an outhouse behind the house, but I started wondering about that, so I looked it up. It turns out that only the richest of the rich had outhouses at that time. The regular people had buckets they emptied ... somewhere. I suppose they would have dumped it downstream.

Now our tour goes out to the kitchen garden, a small garden close to the house where people could get food quickly from a protected area. Kind of a third refrigerator, you could say. 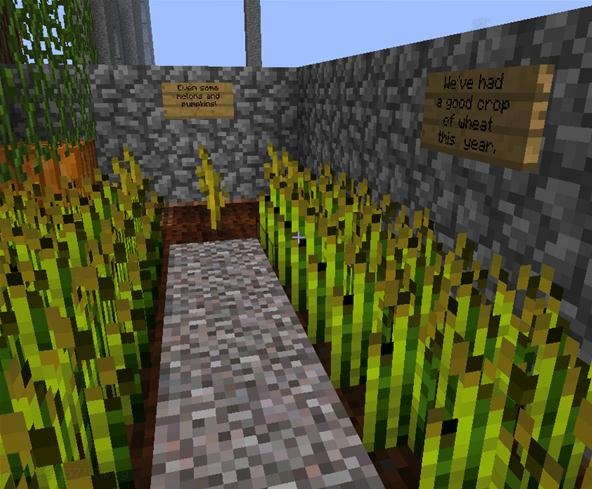 Going back inside, we jump up a few steps to the loft where a few more beds are placed for older children. It was a rare child at that time who even had their own bed, let alone their own room (even among the rich). 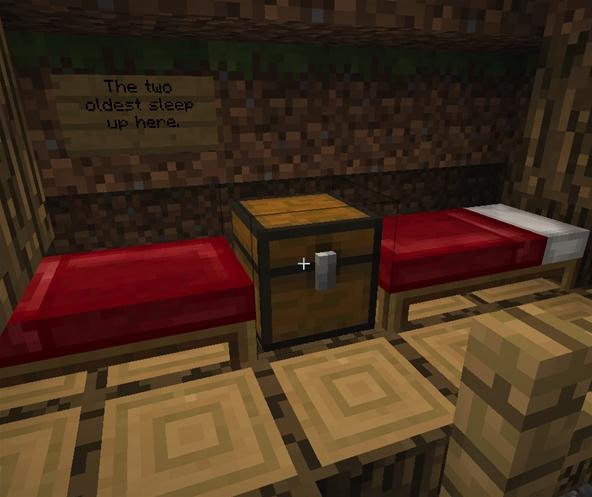 This picture shows the timber framing of the structure well. 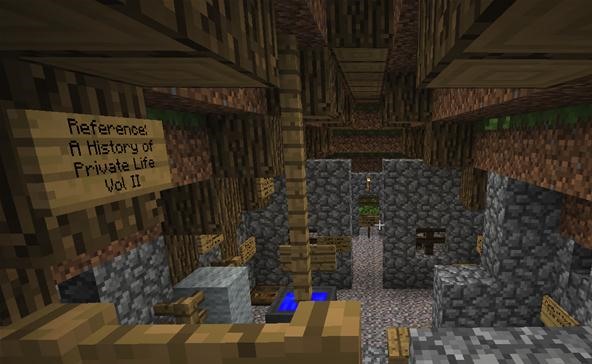 Thanks for coming along on the tour! I had a lot of fun bulding the house and grounds.

I would like to thank tutternbubba, who helped with some of the building. Using a cauldron for the cooking pot was their idea.

If anybody wants to look at the diagrams I used to build this house, here's how you can find them. Go to the page on amazon.com where the book is described. Do a "search inside" and search for the term "Wharram Percy". (That is the site of an excavation of some medieval peasant houses.) This should bring you to page 449. On that page and the next are the main diagrams I worked from. That whole chapter has a lot of information about houses of the different social classes at that time.

Admins, thanks for coming up with such an interesting challenge! Although I must say I hope the challenges aren't all about history, because I'm afraid I'll get drawn in again!

Good job, that place looks really natural.
To be honest I think thats a bit messy but still its fairly nice!

Thanks Philip, I had a lot of fun making it. It is messy but that's the point, life was a lot messier back then. Or maybe just as messy as now but in a different way :)