Here is our entry for the Greek building contest. It is a model of the theater at Epidaurus.

Here are our favorite images and descriptions out of those we used to build it: 1 2 3 4

And here are just a few screenshots. (I promised myself not to get too carried away with signs or explanations this time.) The signs at the site tell a little story about the theater, as told to a famous actor arriving there (go to the giant black arrow to start). 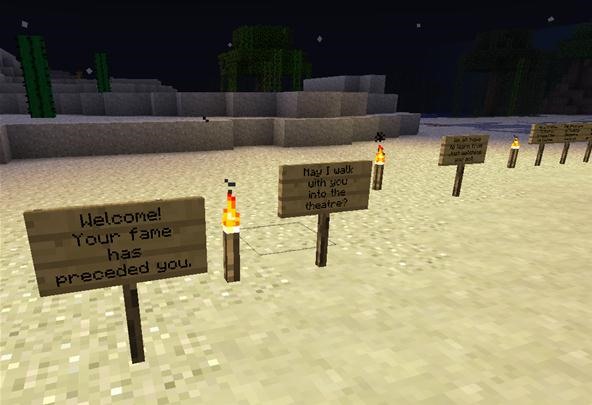 Here is one of the two paradoi, or entrances. The actors entered on the left (up the ramp to the stage or behind to the back entrance). The audience entered on the right. 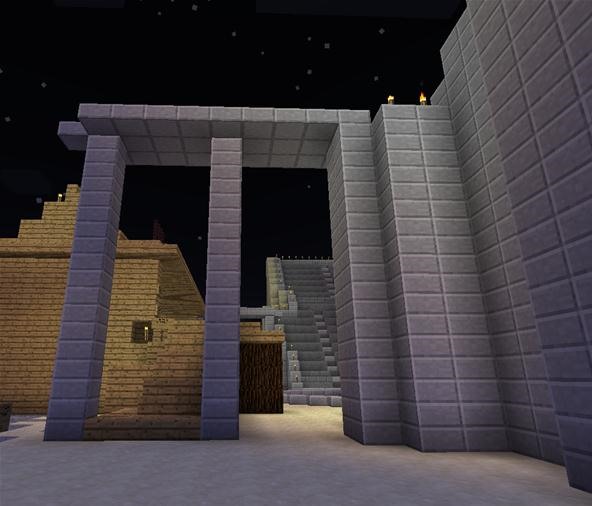 This is what the empty theatre would look like to an actor on stage.

There should be more walkways going up between the seats, but in the real theater the seats were all wedge-shaped to create the rounding; we had to make some difficult approximations. Also the whole thing is about half scale (1 block = 2 meters) because doing it full scale would have been impossible.

Here is the view of the stage from the top row of audience seats. 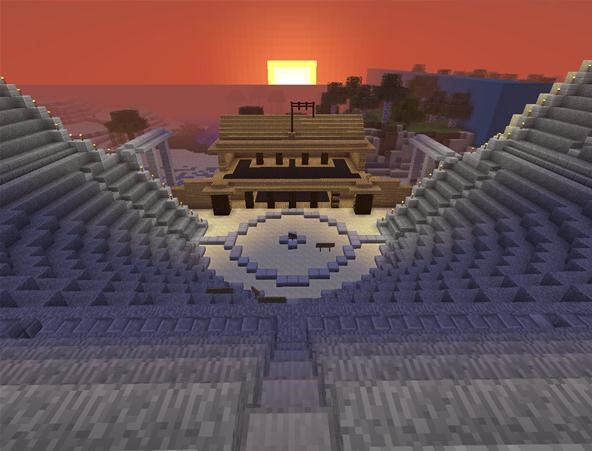 That circle in the middle is called the orchestra, and it is where the Greek chorus stood and sang. Actually we oriented the theater backwards, because Greek theaters were often situated so the rising sun would highlight the scenery behind the stage, which was carefully arranged to suit the play's theme. Note the crane above the stage: this was a machine used to lower actors playing gods from the sky (and is the origin of the term deus ex machina).

Finally here is the whole theater from the air (let's say from a god's eye view :) It is built into the hillside (though it turned out to be quite a bit taller than we expected, so the hill had to rise to meet it). 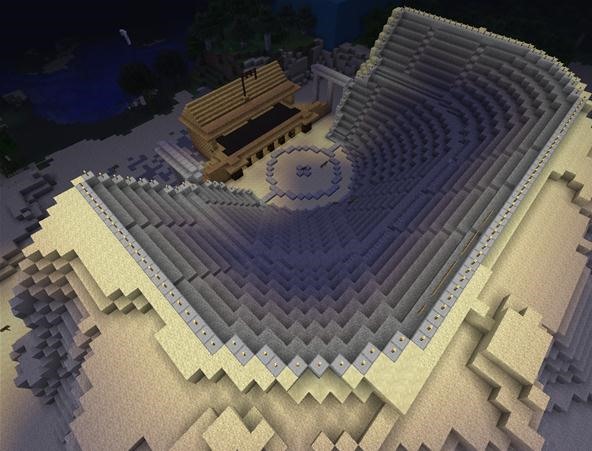 How we built it: first we read a whole bunch of web sites about Greek theaters, then chose this one because it is the best preserved (and therefore has the best images and diagrams to work from). By the way can you believe that this theater is the best preserved because it was FORGOTTEN for hundreds of years? It got covered up by dirt and grass and everyone forgot it was there, until the 1880s when it was discovered intact under the ground. Amazing that you could FORGET something like this.

Anyway then we emptied out a space to work in that was 60x60 (roughly half the size of the real theater in each dimension). Then we marked out the outlines of all the walls on the ground, then built up the walls. We made lots of mistakes!! But it was fun. We had lots of help from tutternbubba, Leinad and Andrewed.

Awsome! You are so going to beat me! Good work!

No no silverbug I love your temple! This has to be discounted by the fact that I'm an adult used to doing big projects. Besides I won once already! But thanks :)