As my in game name (TehGeekFather) would suggest I tend to like things on the Geekier side of things. Games being one of them. (duh I'm on a Forum dedicated to Minecraft) That being said I am a huge Fallout fan. (NO! not the band. <Sigh>) I'm referring to the post apocalyptic series first developed by Black Isle Studios, the roll playing game division of Interplay,  back in 1997. Fallout 1 and 2 were pretty big back then open game play, being able to complete tasks in different ways depending on your stats and whether you wanted to play the good guy or be a dirty rotten survivalist.

Then Bethesda Game Studios bought the franchise and gave us Fallout 3 (ok they didn't give it to us, we still had to pay for it.) Bethesda brought Fallout into the modern gaming world.

In the Fallout universe underground, Life Sustaining Vaults had been built prior to the war over resources in 2077. These vaults were a refuge for humanity. I have always been interested in these vaults and the way they were laid out in the games. To me the funnest parts of Fallout3, New Vegas, and the DLC's were the different vaults that the player was able to explore.

What does this have to do with Minecraft? This weeks Challenge is futuristic builds. The third thing that came to me was Build a Vault Inspired by the vaults in Fallout. (the first and second was a Stargate and the spaceship Lexx)

This may look Simple but it is the entrance to Vault 113.

While during construction people may come and go but once the war comes the vault can be sealed by an override in the Overseers office.

The common room and cafeteria as seen from the security camera.

Featuring Multiple Hydroponic levels to sustain the occupants during the Dark Nuclear Winter.

Vault Security. You don't want to get on these guys bad side. 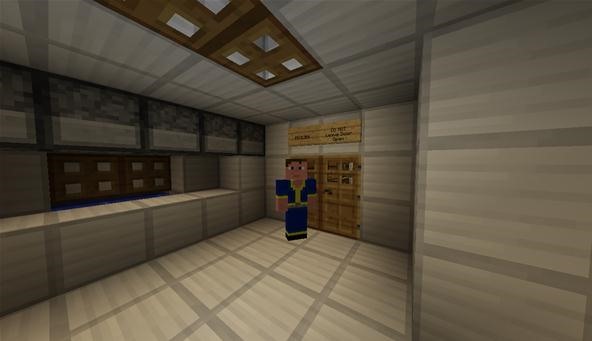 Of Course whats a vault without vault Dwellers? 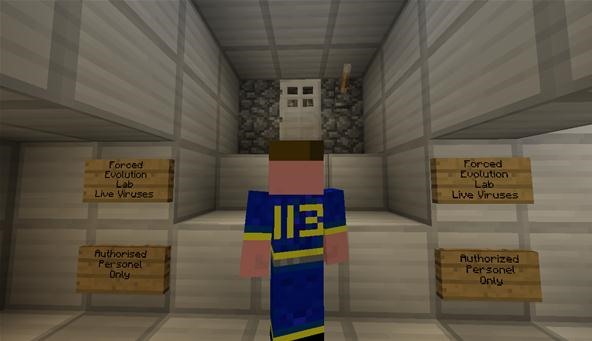 Absolutely amazing! The entries for this week's challenge are just mind blowing.

This came out great, and I can't wait to take another tour through it! You really thought everything through (as always!) and it came together so well.

My favorite is the Vault Security - it looks JUST like a security wing in a movie. The way it's laid out, with the Iron doors - so realistic!

Thanks. I tried adding two new areas per day. Mostly finished Sunday morning around 1am. Could use some animals in the "Protein Farm" But over all I'm satisfied with the it turned out. Your right about the other entries. Some phenomenal work went into all of the designs this week.