Sometimes a simple drowning trap is too boring, and you want something that's a little more stylish and exciting. That's where this trap comes in!

This is what I like to call "The Mangler". It consists of a set of pistons that chomp together, literally chewing up your enemies and depositing their items in a convenient location underneath your home or base.

Here's a video of it in action!

Now, this is a pretty complicated build because it involves principles from a number of other tutorials that we've done before. I'll list them during the tutorial as they become applicable, but here's the list of past articles that may be helpful for this build:

Now that you've had a chance to familiarize yourself with our past tutorials (or not), let's go ahead and get started on this puppy!

Your first hole is going to be ten by eight by three. That is, ten blocks wide, eight blocks long, and three blocks deep. 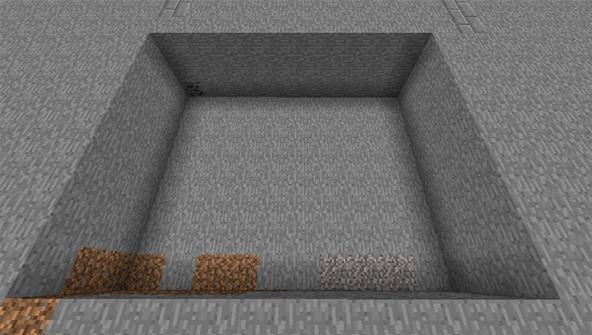 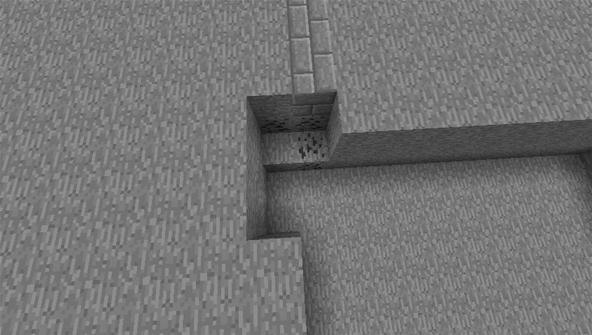 Step 3 Do you like digging holes? I hope so! Dig another one!

Now you're going to dig another hole, right in the middle of your first hole. You want a one-block width border, so this hole will be eight by six by two. 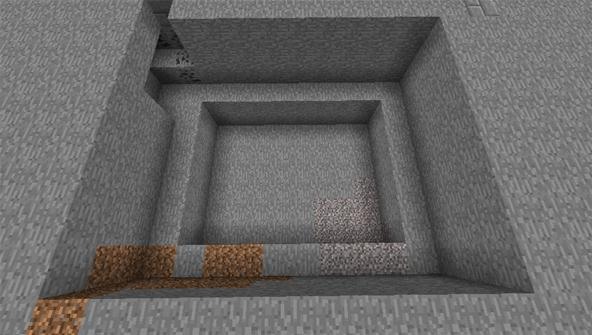 Also, at this stage you may want to go ahead and add two blocks to the upper left side, even with the ground level, so you'll have a little alcove in there.

Step 4 You'll dig another hole, and you'll like it!

Yeah, I know, it's a lot of holes. But you need space for all the redstone you're going to be using! So you're going to dig a hole right in the middle of your bottom hole, and this one will go across the hole longways. It will be six by two by one. So six blocks long, two blocks wide, and only one block deep. 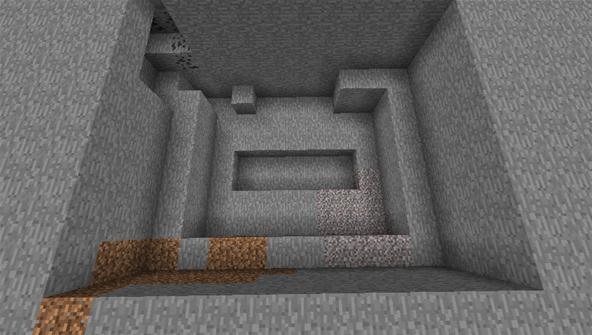 You should probably also get rid of some of your wall against the side nearest your house, too. You may notice a chunk missing in the above picture. The missing piece is seven long and two deep, but be sure to leave that one, lonely little block.

Step 5 This is the last hole, I promise!

Now start in the middle of your lowest hole and tunnel directly toward your house or base. You're going to make a tunnel two blocks wide and two blocks tall, and you want it to be at least eight blocks long, possibly longer if you'd prefer. Once you've gotten in there eight or more blocks, tunnel upward until you reach the surface. Toss a ladder on there for easy entrance and exit. 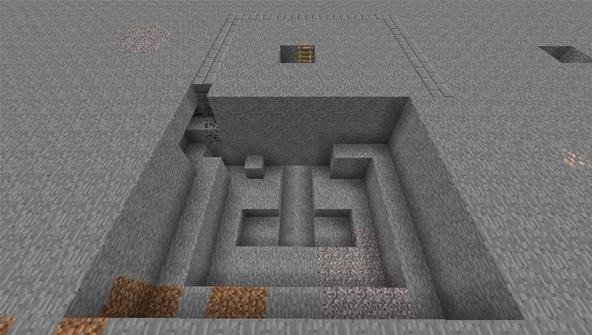 At this stage, we're done digging, and I can go ahead and put the house on top of it. You can easily do this under an existing house, but it's pretty tough to take good pictures of something that's underneath a house. 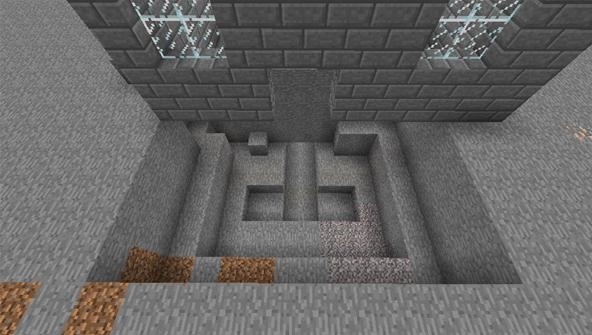 You may want to wait until you finish your trap before erecting your house, at least until you have a good grasp of where you want everything to be.

Step 6 Put some blocks back 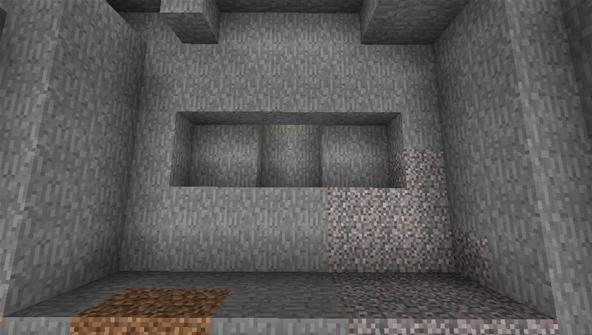 When you're done, your bottom floor should be totally smooth, but you should have a tunnel two blocks wide and one block tall running from your hole into your house.

Step 7 Let's start in the corner

So, you know how you've got that weird little corner in the side closest to your house? Well, let's fill that in with some redstone.

First, you're going to expand into the wall a little bit, just one block. Then set it up like it appears in the picture: you've got a repeater at the bottom with no delay, pointed at the lone block that's against the wall. Then you've got some redstone wire going toward the wall and a redstone torch attached to the block above it. Then your redstone wire basically just goes up those steps. 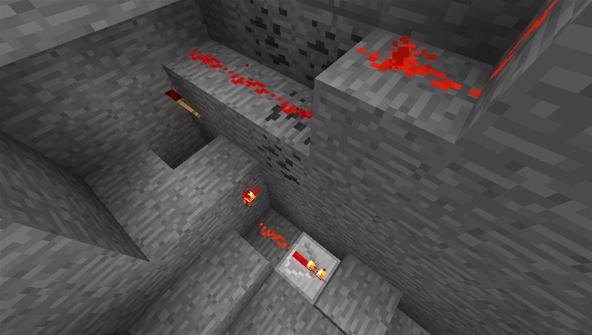 However, the tricky part is to add the torch to the far block and to break the block under it. Then at the bottom of the little hole, put some redstone. I know it's a little difficult to understand, but try to match the redstone in the picture.

Now let's add the heart of this mechanism, the thing that will make it beat like the bloodthirsty beast it is. This simple clock design basically attaches to that lone block that now has a repeater pointed at it. For more information, refer to this tutorial on clocks. 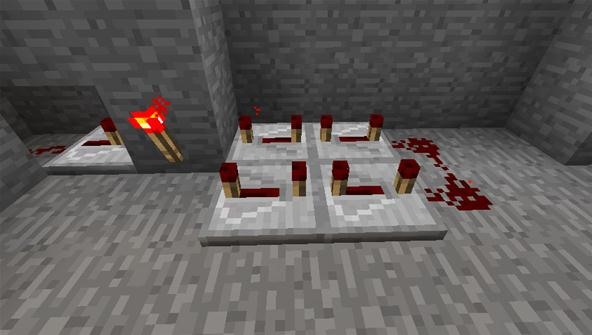 You should also add a block to the top of that funny, lone little block so that he isn't so lonely anymore. Then attach another one onto him, pointing into the corner. Put another block directly on top of the torch in the corner.

Step 9 Give it some dentures

Now it's time to add the jaws of your machine. Add two sticky pistons to each side of your hole, facing inward, and put whatever blocks in front of them that you want to be the stompy bits. 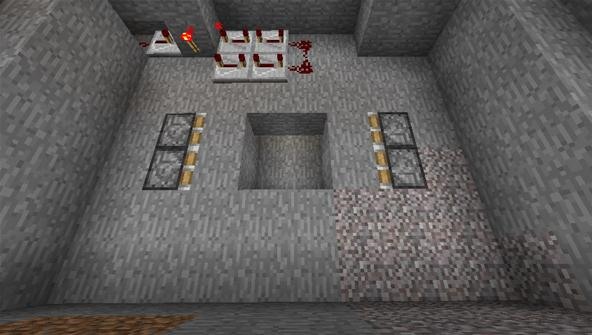 Step 10 Wire up the mangler!

Now you can give it life! Run some redstone along the walls with a repeater to ensure that the signal reaches all the way around. 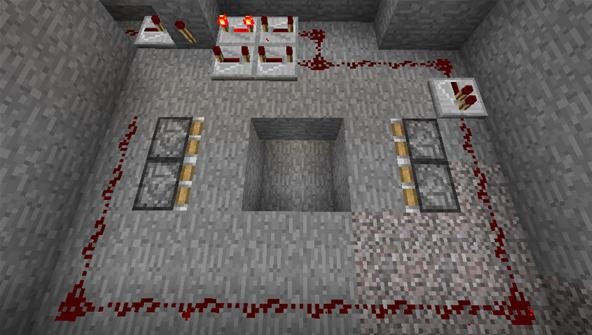 At this point, it will turn on. Don't fall into it unless you want to have a bad day.

Put some water inside of the bottom hole against the far wall, so that it flows into the tunnel that you've created under your home. 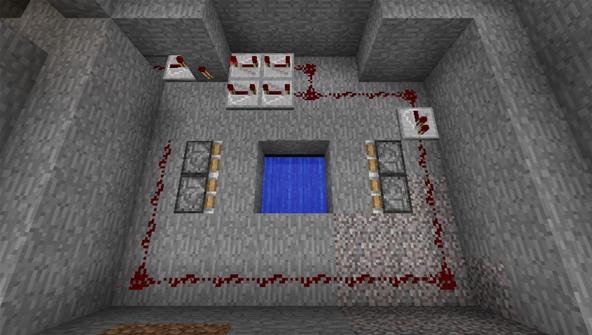 Step 12 Put some blocks over your clock

Add a row of blocks over your clock. 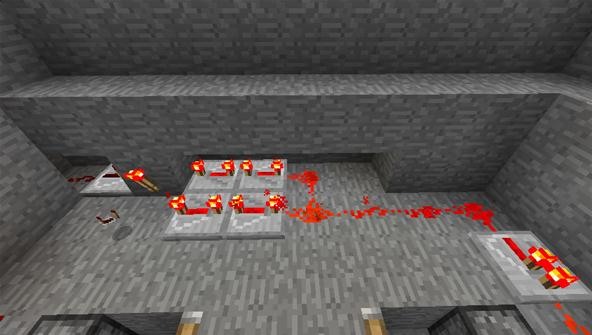 Now that you've gotten your bottom layer working, it's time to cover it up and move on to the upper layer. So what you want to do is add blocks around the open hole, two blocks high, then add another set of blocks behind it, so that it covers the pistons underneath. 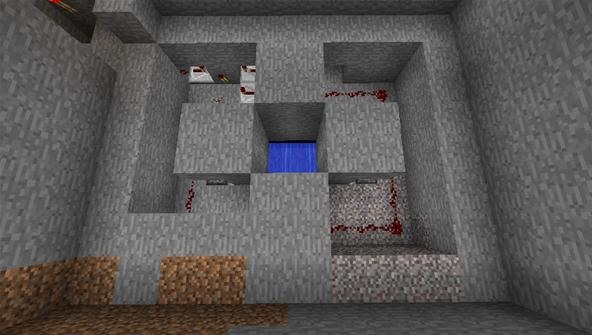 Additionally, add three extra blocks on the wall away from your house, headed toward the wall that has your weird corner.

Now you're going to make a trap door, just like it was explained in our earlier tutorial. That was a tutorial all on its own, so it's a little too complicated to include step-by-step in this tutorial. However, if you want to skip that step, you may be able to figure it out just by following the design in this picture: 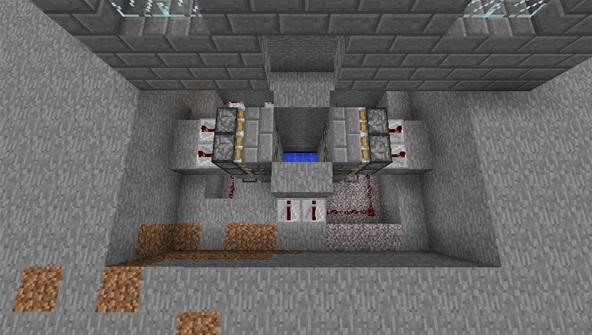 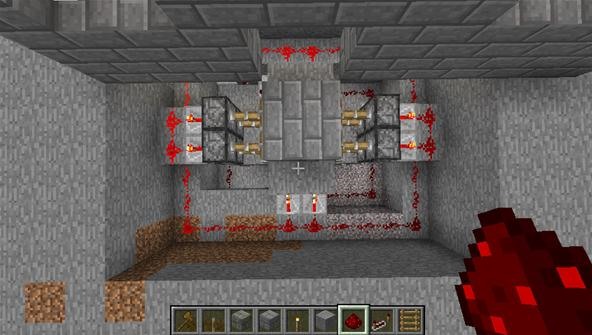 This is how it connects to the weird corner: 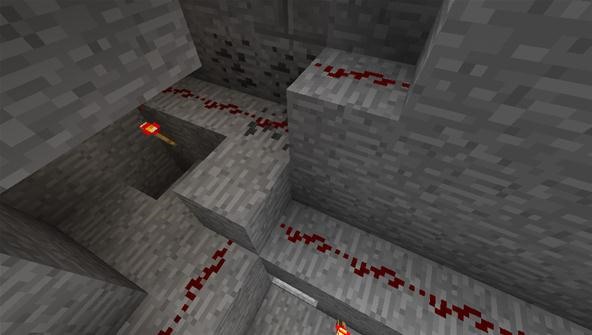 Now provided that you've done it properly, you should have a complete functional Mangler! Simply attach a lever (or button and T flip-flop) to the redstone leading out of the top of the weird corner, and you're good to go! 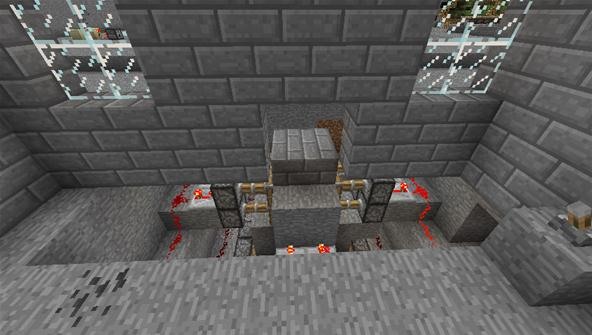 Just fill everything in at ground level (other than the hole in the middle), and you're ready to start mangling whatever you want. 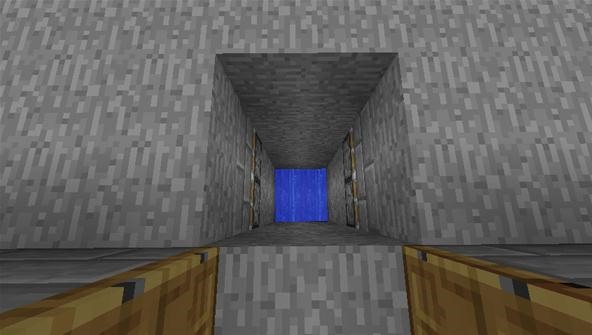 Step 16 What about that water in the bottom?

Just like in our earlier drowning trap, anything that the monsters drop in your mangler will be carried down the tunnel you made earlier, and will be easily accessible from inside your house. 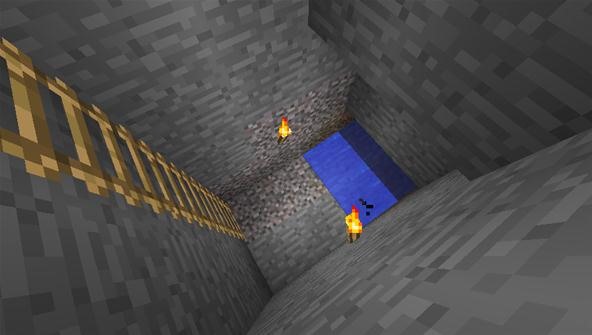 The water carries the items right in, while the low ceiling prevents monsters from infiltrating your base from below.

How handy is that?!